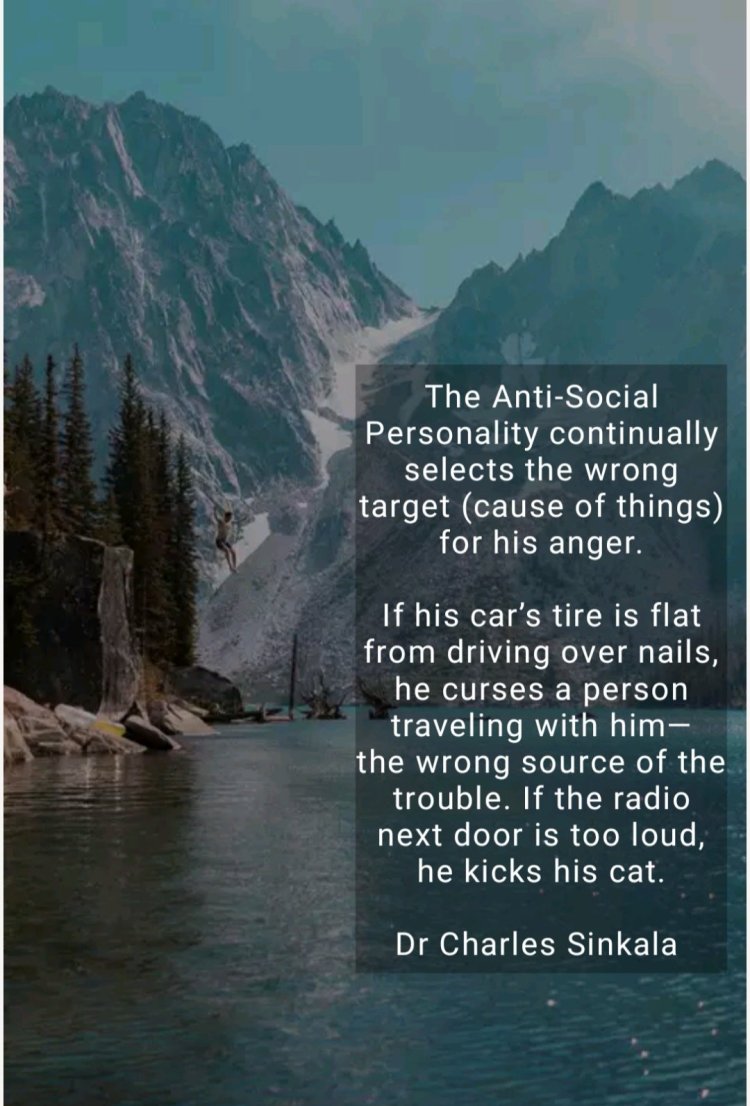 1. He speaks only in very broad generalities (statements that give no details). “They say…,” “Everybody thinks…,” “Everyone knows…” and similar statements are in continual use, particularly when spreading rumors. For example, the Anti-Social Personality can spread a rumor, such as “Nobody likes to go to that restaurant; everybody hates it.” When asked “Who is everybody ?” he pretends that it is the opinion of the whole society. It normally turns out to be that only one person said it and that one person is the Anti-Social Personality himself.

2. Such a person deals mainly in bad news, critical or hostile remarks, invalidation (making someone seem wrong or less worthy) and general suppression (actions that keep others down, make them fail, etc.).

There is no good news or compliment passed along by such a person.

For example, say a young girl was learning to play the piano. The Anti-Social Personality would be likely to make comments about how the girl was making errors and playing too many wrong notes (being critical) and saying the piano was an instrument he hated (a hostile remark) and then telling the girl that she did not have the basic talent and would never be able to play the piano properly (suppression).

3. The Anti-Social Personality worsens the communication when he passes along a message or news. Good news is stopped and only bad news, often added to, is passed along.

Such a person also pretends to pass along “bad news,” which is actually invented by him.

4. One of the saddest things about an Anti-Social Personality is that he does not improve or get well as a result of treatment that he receives.

5. Surrounding such a personality, we find frightened or ill family members or friends who, when not actually made to become insane, are failing.

Such people who have been frightened or made ill by the Anti-Social Personality make trouble for others.

These people also do not commonly recover in the expected time from physical illnesses, even with treatment. Instead they get worse and have poor recoveries.

The largest number of insane people become insane because of such anti-social connections and they do not easily recover for the same reason.

6. The Anti-Social Personality continually selects the wrong target (cause of things) for his anger.

If his car’s tire is flat from driving over nails, he curses a person traveling with him—the wrong source of the trouble. If the radio next door is too loud, he kicks his cat.

If A is the obvious cause, the Anti-Social Personality blames B or C or D.

7. The Anti-Social Personality cannot finish a project or action.

He becomes surrounded with incomplete projects and things that were started and never finished.

8. Many Anti-Social Personalities will very easily confess to the most alarming crimes, but they will have no sense of responsibility for them.

Their actions have little or nothing to do with their own choices or decisions. Things “just happened.”

They have no sense of actually having caused something and so cannot feel any shame or guilt when they have done something wrong.

For example, the Anti-Social Personality could carelessly throw something heavy out of a window in a building and really hurt someone standing outside. He would not feel that he had done anything wrong. He would just blame the person for walking past the window when he threw something out of it.

9. The Anti-Social Personality supports only destructive groups and attacks any constructive group or group working to help people.

10. This type of personality approves only of destructive actions and fights against constructive or helpful actions or activities.

The artist, in particular, is often attacked and suppressed by Anti-Social Personalities, who see in his art something that must be destroyed and, “as a friend,” try to do so behind his back.

11. Helping others is an activity that drives the Anti-Social Personality nearly insane. Activities that destroy in the name of help, however, are closely supported.

12. The Anti-Social Personality has a bad sense of who owns property and thinks the idea that anyone owns anything is a lie made up to fool people. To him, nothing is ever really owned.